Diabetes Technology on The Horizon 2020

Tech on The Horizon: Automated Insulin Delivery Systems Coming In 2020 NEW NOW NEXT

2020 is shaping up to be a huge year in automated insulin delivery. Updates from DiabetesMine Innovation Summit’s first-ever closed loop showcase

The diaTribe team was on the ground at UCSF Mission Bay for DiabetesMine’s 2019 Innovation Summit, which featured updates on many of the new automated insulin delivery systems expected over the next few years. This list covers many of the most notable products coming soon. A more detailed description of each product follows the table of contents below. All descriptions and launch timelines reflect US availability.

What is automated insulin delivery (AID)?

When thinking about AID systems, it’s often helpful to think in stages.

Currently available products are in stages 2-3. By the end of 2020, we may have multiple available systems at stage 4.

What is it? Medtronic’s MiniMed 670G has been available since spring 2017 and was the first AID system to be FDA approved. The MiniMed 670G automatically adjusts basal insulin delivery every five minutes based on CGM readings, targeting a level of 120 mg/dl. The target glucose can also be temporarily raised to 150 mg/dl when low blood sugar (hypoglycemia) is a concern, such as during exercise. The MiniMed 670G comes with Medtronic’s Guardian CGM, which has seven-day wear and requires two-calibrations per day (although four are recommended). See our article from 2016 for a full breakdown on the MiniMed 670G.

What is it? Tandem’s Basal-IQ has been available since August 2018 and uses Tandem’s t:slim X2 pump with Dexcom’s no-fingersticks G6 CGM. Basal-IQ is a predictive low glucose suspend system, meaning it will stop basal insulin delivery whenever glucose is predicted to be below 80 mg/dl within the next 30 minutes or when glucose is already below 70 mg/dl and falling. The system will automatically resume delivery whenever the user’s glucose levels begin to rise. Importantly, Basal-IQ was provided as a free at-home software update to in-warranty users of the t:slim X2 pump.

Currently under FDA review. Expected approval and launch in late 2019 for 14+ years. 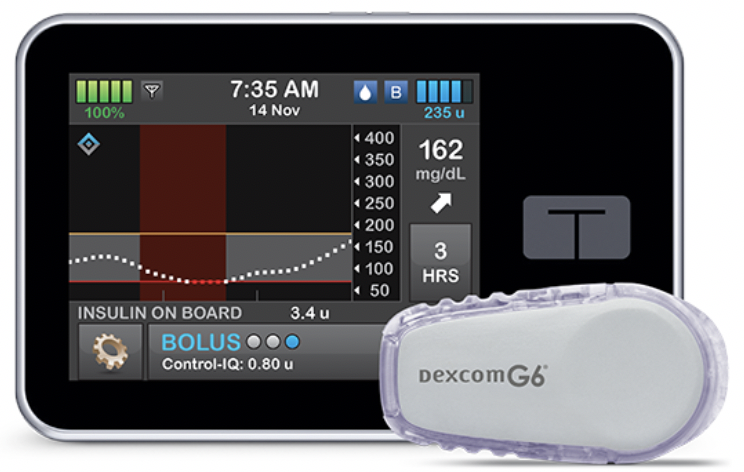 What’s new? The highly anticipated Control-IQ will be a free software update for people using Tandem’s t:slim X2 pump with Dexcom’s no-fingersticks G6 CGM. Control-IQ will be the first system to bring automatic correction boluses: when it predicts glucose to be above 180 mg/dl in 30 minutes, the system will deliver 60% of the correction bolus needed to reach a target of 110 mg/dl. Control-IQ also includes automatic basal rate adjustments and will predictive insulin suspension (like Basal-IQ). Control-IQ targets glucose values between 112.5 and 160 mg/dl, though when Sleep Activity mode is on (users can either turn it on/off manually or set a sleep schedule), the system tightens the target range to achieve 112.5-120 mg/dl by the morning. A 168-person study of Control-IQ was presented at ADA 2019 (see diaTribe’s coverage) and showed time in range was 2.6 hours per day higher (70% vs. 59%) for those using Control-IQ vs. the same pump and CGM without Control-IQ. A1C was 0.3% lower with Control-IQ (7.1% vs. 7.4%).

How do I get it? When Control-IQ receives FDA approval, in-warranty t:slim X2 users will receive an email with a link to a website where they will be able to request a prescription for Control-IQ. When Tandem receives the prescription, it will send a link to an online training module and quiz that users will have to complete and pass. Then, they will receive a unique download code that can be used to update their pumps with Control-IQ. Note: this update process is subject to change, as Control-IQ is not yet FDA approved. 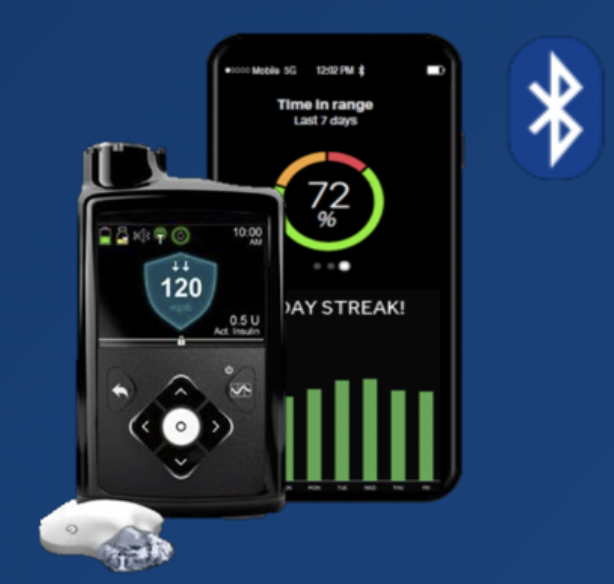 What’s new? MiniMed 780G will be Medtronic’s second AID system and a significant upgrade over MiniMed 670G. MiniMed 780G will include automatic correction boluses and an adjustable glucose target down to 100 mg/dl. The system will also have fewer alarms and simpler operation than the 670G. Medtronic is targeting an ambitious >80% time in range goal for 780G users. The 780G will also add Bluetooth connectivity to the pump, meaning users will be able to view pump data on their phones, upload pump data wirelessly, and update their pump wirelessly. MiniMed 780G will use the same Guardian CGM as 670G, which requires two fingersticks per day and has a seven-day wear time. The FDA is currently reviewing Guardian CGM for “non-adjunctive” use – if approved, this means that users will be able to deliver insulin boluses based on the CGM reading alone, without a confirmatory fingerstick.

Insulet Omnipod Horizon – expected in second half of 2020

Pivotal trial is expected to start in December, US launch planned for second half of 2020. 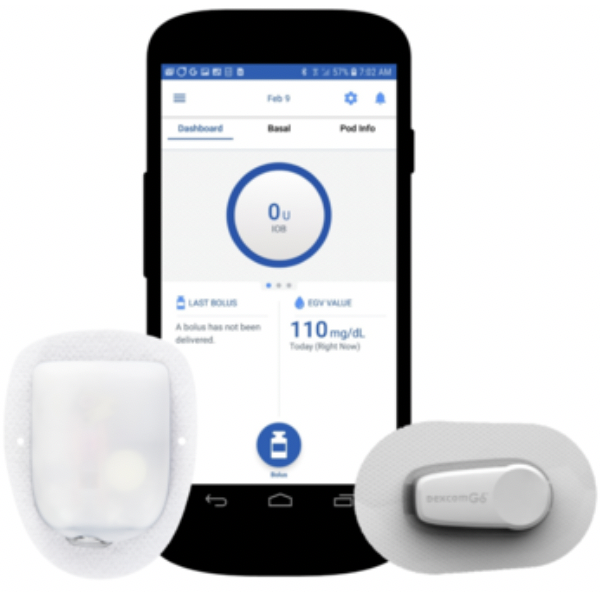 What’s new? Horizon is Insulet’s AID system for its popular Omnipod 3-day wear patch pumps. The system uses Dexcom’s G6 CGM and will likely be the first pump and AID system that users will be able to control directly from their smartphones. Smartphone control may be available for Android users first, though Insulet is also working with Tidepool (see below) on an iPhone offering. Horizon will have adjustable targets between 100 to 150 mg/dl. Because the Omnipod pump will store the algorithm and communicate directly with Dexcom G6, the system will work even when their smartphone/pump controller is not nearby.

What’s new? Unlike the others in this list, Tidepool is a non-profit and is working on the AID algorithm only (in other words, Tidepool does not have its own insulin pump). About one year ago, Tidepool announced its plans to submit the do-it-yourself (DIY) Loop app to the FDA as an officially supported app available on the Apple app store. Loop is an open-source (free and publicly available, like Wikipedia), non-FDA-approved AID system that is compatible with Dexcom and Medtronic CGMs and old Medtronic and Insulet pumps. Read about Adam’s experience using DIY Loop here. Tidepool plans to get Loop approved by the FDA, available on the App Store, and work with in-warranty, commercially available pumps and CGMs. Currently, Tidepool has partnerships with Insulet, Dexcom, and Medtronic. An large, completely virtual study is ongoing for Loop users and the data will support Tidepool’s submission of Loop to the FDA. To differentiate Tidepool Loop from the DIY-version, Tidepool Loop will have different colors, guardrails around certain settings, and a built-in tutorial for new users. Much of what Tidepool is doing is unprecedented, so the launch timing is unclear. CEO Howard Look said at Friends for Life 2019, “We never want to be the company that contributes to mis-set expectations (like ‘a cure in five years’), so we want to keep expectations low. We hope it's measured in months, not years. We let the FDA know that we set an aggressive target of trying to have a submission prepared before the end of the (calendar) year, but there’s a lot that's out of our control, so that's just an estimate. We promise to keep the community up to speed as things proceed.”

Looking beyond 2020, we will see further advanced in AID systems, including the first dual-hormone (insulin + glucagon) systems.