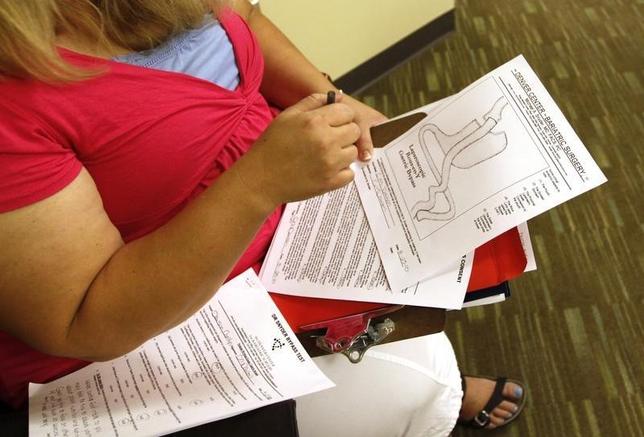 Carolyn Dawson, bariatric surgery patient looks at a diagram of her procedure at her surgeon Dr. Michael Snyder's office in Denver five days before her operation August 25, 2010.
Reuters/Rick Wilking

(Reuters Health) - Weight loss surgery may be a cost-effective way of lowering blood sugar for many diabetics, not just those who are severely obese, a Swedish study suggests.

Researchers found that for people with diabetes, total healthcare costs did not rise in the years following weight-loss surgery, largely because of overall savings from less use of healthcare and medications.

For people with normal or merely elevated blood sugar below the cut-off for diabetes, the surgery was linked to higher costs afterward.

has found that weight loss procedures, known as bariatric surgery, can lower blood sugar so much that diabetes essentially disappears, operations are still typically recommended only for extremely obese patients.
“Greater weight should be given to preoperative blood sugar status to help identify the patients who have the most benefit from bariatric surgery,” study

co-author Martin Neovius of the Karolinska Institute in Stockholm said by email. “We have shown previously that this makes sense from a health outcomes perspective, and now we show that it makes sense also from an economic perspective.”Globally, 1.9 billion adults are overweight or obese, according to the World Health Organization (WHO). Obesity increases the risk

of heart disease, diabetes, joint disorders and certain cancers. Roughly one in nine adults have diabetes, according to the WHO. Most of these people have Type 2 diabetes, which happens when the body can't properly use or make enough of the hormone insulin to convert blood sugar into energy.

A growing number of extremely obese patients have turned to surgery after failing to achieve significant weight loss through diet, exercise or medication – strategies that can also manage diabetes. Like all surgery, it isn’t risk free, and bariatric operations in particular carry a risk of malnutrition.

Clinical guidelines used in many parts of the world only recommend bariatric surgery for patients who are extremely obese, based on a measure of weight relative to height known as body mass index (BMI).

An obese adult who is 5 feet 9 inches tall would weigh at least 203 pounds and have a BMI of 30 or more, for example. Only adults with a BMI greater than 40 should get bariatric surgery, according to widely followed recommendations from the U.S. National Institutes of Health, although some patients with serious health problems, including diabetes, may be candidates with a BMI over 35.

For the current study, Neovius and colleagues followed 4,030 patients for about 15 years. Roughly half of them received bariatric surgery, while the rest did not.

Within each group at the start of the study, many patients didn’t have diabetes, while some had elevated blood sugar that suggested they might be at risk for developing the disease and others already had full-blown diabetes.

When people without full-blown diabetes got bariatric surgery, their treatment costs including the operations and follow-up care were higher than similar patients who didn’t have the procedures.

But for diabetics, the costs for the surgery group and the nonsurgical group were roughly the same after 15 years. The cost of surgery was largely offset by less use of healthcare and lower prescription drug costs, the study found.

One limitation of the study is that it relied in part on self-reported drug costs, and lacked data on costs related to nonprescription drugs, nursing homes, medical equipment and certain services like dieticians and psychologists, the authors acknowledge in The Lancet Diabetes and Endocrinology.

The findings suggest that bariatric surgery should be considered for diabetics who don’t succeed at controlling their blood sugar with drugs and lifestyle changes, regardless of their BMI, argues Ricardo Cohen, of the Center for Obesity and Diabetes at the Hospital Oswaldo Cruz in Sao Paulo, Brazil, in an accompanying editorial.

Bariatric surgery guidelines should be “unchained from BMI alone,” Cohen told Reuters Health in an email. “Patients should not have any barrier to the surgical treatment of diabetes when there are several studies that show when diabetes is not under control with medication, surgery offers good clinical and economical

Bariatric surgery prevents and induces remission of type 2 diabetes in many patients. The effect of preoperative glucose status on long-term health-care costs is unknown. We aimed to assess health-care costs over 15 years for patients with obesity treated conventionally or with bariatric surgery and who had either euglycaemia, prediabetes, or type 2 diabetes before intervention.

The Swedish Obese Subjects (SOS) study is a prospective study of adults who had bariatric surgery and contemporaneously matched controls who were treated conventionally (age 37–60 years; BMI of ≥34 in men and ≥38 in women) recruited from 25 Swedish surgical departments and 480 primary health-care centres. Exclusion criteria were identical for both study groups, and were previous gastric or bariatric surgery, recent malignancy or myocardial infarction, selected psychiatric disorders, and other contraindicating disorders to bariatric surgery. Conventional treatment ranged from no treatment to lifestyle intervention and behaviour modification. In this study, we retrieved prescription drug costs for the patients in the SOS study via questionnaires and the nationwide Swedish Prescribed Drug Register. We retrieved data for inpatient and outpatient visits from the Swedish National Patient Register. We followed up the sample linked to register data for up to 15 years. We adjusted mean differences for baseline characteristics. Analyses were by intention to treat. The SOS study is registered with ClinicalTrials.gov, number NCT01479452.